Ruckus is over already? Thank you so much for sharing your photos, stories and pearls with all of us. I really enjoyed reading every post.

Yes! Thank you so much for sharing so much with us. It was the very next best thing to actually being there.

How was the orient show and tell?
Contemporary Jewelry by Beatriz Fortes
My blog

I finally have some of my photos resized. I'll try to avoid a lot of duplication.

I'll begin with a portrait of this amazing woman as we are leaving the mansion. Caitlin, I love those sunglasses! Not to mention those gorgeous new little h geode earrings, and that natural pearl necklace and that unique pearl pendant. 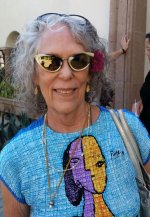 This is my second PP ruckus, and I purchased quite a few strands last year. So, I wasn't looking for more necklaces. Instead I focused on the new, exciting, beautiful and unusual. I'm quite pleased.

Let's begin with my Sea of Cortez pearls. SoC is the very definition of new, exciting, beautiful and unusual. I already own a couple of loose pearls, earrings, a ring, and a mabe pendant and earrings. At the ruckus I purchased a SoC bracelet with a mix of cultured SoC pearls and natural SoC hinge pearls. Douglas explained to me that the hinge pearls are natural Sea of Cortez pearls that are found in the hinge region of the rainbow lip oyster. Unlike most SoC pearls, hinge pearls are pure white and lack the characteristic red fluorescence of most SoC pearls. 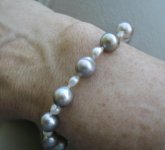 The rest of my Sea of Cortez pearls are loose. Douglas brought several unusual mabe pearls this year that were formed when the rainbow lip oysters were attacked by vampire crabs. At first they thought that the vampire crabs would eat the oysters. But, the oysters defended themselves very well. These mabe pearls actually contain vampire crabs that the oysters covered with nacre. A vampire mabe! That I had to have. It is the large pearl on the right side of this photo.

Next, I selected a baroque pearl that matched my vampire mabe in both surface pattern and color. (Below the mabe in this photo.)

I also purchased a large blue baroque Sea of Cortez pearl that I'm hoping to make into a pendant.

Finally, Douglas allowed me to select a tiny keshi to take home. I think my little SoC keshi has the shape of a sunflower seed. 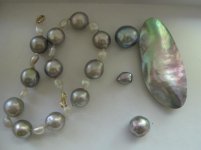 I had been holding out on buying an octopus pendant from la_corsetiere until I could see them for myself in person at the ruckus. My choice was a slightly blackened silver octopus with a Tahitian head. I named her "Candi" because the pattern of colors on the Tahitian reminded me of candy stripes. The name ends in "i" to honor her creator Sheri, whose name also ends in "i".

In the first photo, Candi is pictured next to one of my new Sea of Cortez baroque pearls. In the second photo I am wearing Candi by hanging her from a stainless steel chain that I already owned. 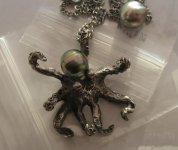 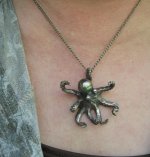 My next stop was to my favorite Tahitian pearls farmers. Kamoka pearls are some of my favorite pieces. I already own a Kamoka harvest strand and bracelet, several pairs of Kamoka earrings, Kamoka pendants and a couple of Kamoka rings. I selected this colorful Kamoka drop set in sterling silver to wear on a sterling bracelet that I purchased last year from PP. 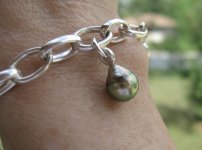 On our return to Pearl Paradise on Sunday, I located more of the unusual, beautiful, and exciting. The Burmese South Sea pearls have already been blogged and photographed on this thread. These two Burmese beauties became mine. They are about 8mm and 11mm. 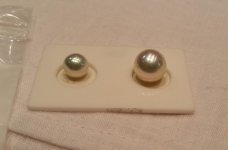 I selected one of the Edison drops to be made into a pendant/enhancer. (Sorry, I didn't take my own photo, but I see it here in an earlier photo taken by lilliefuzzysocks. I hope this is o.k. to use. )

I was told that this pearl was selected by Hisano. The luster is amazing, and the color should contrast beautifully when hanging as an enhancer from a strand of green Tahitians. 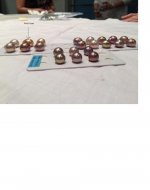 At one point I came into the room to discover a pair of gorgeous round 9-10mm AAA pistachio Tahitians laying in the middle of the pearl sorting table. I was told that they had been matched by Chenai and that no one had claimed them. I had been looking for pistachio pearls to go with my silver pistachio Tahitian drop strand that I had purchased from PP earlier this year. Hisanso drilled them and mounted them on white gold eye pins for me on the spot. Here I am wearing them on a pair of white gold and diamond huggies that I already owned.

I am thrilled with these. I wore this set the first two days that I was home after the ruckus.

Finally, I purchased a small Tahitian keshi loose and brought it home. It is tiny, but mighty. These dark keshi have already been mentioned in the PP blog and Hisano is using them in her lovely jewelry.

I showed it and my new little Burmese to a local jeweler today. One possibility is to attach them to diamond pendants. But, I haven't decided yet.

I can't thank our host and hostess enough for sponsoring this wonderful ruckus event. I enjoy seeing my pearl friends and their pearls. I love meeting the farmers who create our pearls. Thank you to the talented artists who share their expertise. This is truly one of the highlights of my year.

I shot this photo as the last van left PP on Sunday afternoon. Now these wonderful people can look forward to recovering from hosting this amazing weekend.

Good-bye Jeremy and Hisano. Thank you for everything! 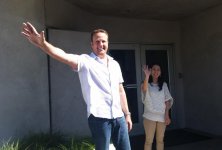 Of course, I forgot one more thing. At PP I was showing Jeremy the multicolor strand of round Tahitians that I had purchased at last year's ruckus. I said that not only did my bracelet have three blue pearls, but I thought it also had natural colored chocolate Tahitians. I wondered if Jeremy could confirm. At this, he ran to his office and came back with a baggy of natural colored chocolate Tahitian pearls that he had been collecting for a necklace. The outside bag was labelled with a drawing of a chocolate candy kiss, and inside were baggies of chocolate pearls grouped by size. We opened the bags and admired the pearls. But, the smallest bag labelled 8-9mm had just three pearls inside, and were so very dark and lustrous. Two of them matched pretty well, so I selected them to be made into studs. The wonderful folks at PP drilled and glued them for me on the spot, and I was able to take them home. I wore them today with my multicolor Tahitian necklace and bracelet, and felt like a pearl queen.

Thank you, again, to all the wonderful folks at Pearl Paradise. 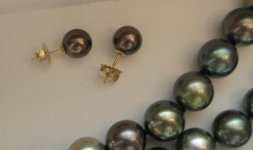 WOW, Red! That is one amazing loot. Thank you for showing us your new pieces and explaining them to us.

I love all your new pearls! The Burmese SSs look so pretty... and everything else, really. That baroque Sea of Cortez.... my heart goes pitter patter.

Red, your pearls are stunning. Thank you for sharing your goodies! I love reading about the goings-on at the ruckus.

Red - it's no wonder you felt like the Pearl Queen...you are the Pearl Queen !! lol Good Grief what a fabulous haul of pearls !!! And the little Octopus...Candi is perfect...I looked at those coloured rings and thought Candi-Striper! (do they still have them in hospitals in the USA? ) ha!

And wow to your Burmese and gorgeous little Tahitian .. I can't wait to see what they will morph into !! (I'm definitely turning a shade of Envy Green )
https://www.instagram.com/pearlzaustralia/?hl=en
https://www.etsy.com/shop/pearlzaustralia

Red, it was a real treat getting to watch you pick out some of these gorgeous pearls
B

Red, I'm admiring all your new pearls as well as the old ones. Thank you for the big pictures. It's nice to see these beauties clearly.

Wonderful taste in pearls, Red, and some gorgeous new additions to your collection! Whatever you decide to create will be outstanding! Love, love, love the colorful new Kamoka pearl for your bracelet!
Pattye