Pearls are among the world's oldest gems, and from the time they were first discovered, they have remained some of the world's most sought-after and most revered gems. Throughout time, there have occasionally been a few pearls discovered that stand out among even these rare gems. Many of these famous pearls, some of them thousands of years old, are still around to be admired today. These pearls are remarkable reminders of the rich pearl history.


The Abernathy (aka "Little Willie") Pearl

A large, natural freshwater pearl, The Abernathy is considered one of the finest freshwater pearls ever found in the rivers of Scotland. This famous specimen is nicknamed "The Little Willie Pearl". It's typically described as weighing 44 grains, but is likely 34 grains.

The Scottish have searched their abundant lochs and rivers for centuries seeking prized pearls. Freshwater pearls were indeed found in abundance until the Industrial Revolution polluted the waterways and wreaked havoc on the pearl producing mussel populations.

The Abernathy pearl was displayed for nearly 30 years in a jewelry store in the city of Cairncross until it was sold for undisclosed sum in 1992. It was the manager of Cairncross, a jeweler in Perth, who reported the actual weight to be 34 grains. Reportedly given to Khubilai Khan, the emperor of China, by Marco Polo, the Arco Valley Pearl is a baroque pearl weighing 575 carats, or 2301 grains, (78 x 41 x 35 mm) and is a white pearl with overtones of pink and brown.

Valued in 1991 at $4.7 million US dollars, the "Big Pink Pearl" is listed in the Guiness book of World Records as being the largest natural abalone pearl ever found. This baroque gem weighs a full 470 carats.

The owner of this gem is Wesley Rankin, who found the pearl while diving at California's Salt Point State Park in Petaluma, California, back in 1990.

This pear-shaped pearl was the largest know pearl discovered during the early 17th Century off the coast of the West Indies. The gem weighs a hefty 126 carats. It is said that King Philip IV purchased this pearl from a merchant name Gogibus who wore the pearl as a button in his cap in 1620.

Most likely the largest and most famous natural saltwater pearl ever discovered, the Hope Pearl, is an astonishing gem. The pearl weighs 1,800 grains (450 carats), or approximately 4 ounces! The Hope is a white, drop-shaped blister pearl, measuring approximately 2 x 4 inches, and ranging in color from greenish-gold on one end to white on the other. 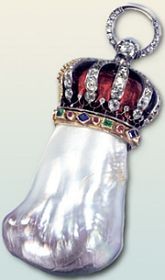 Currently residing in the British Museum of Natural History, the Hope Pearl was once owned my Henry Philip Hope, the one-time owner of the Hope Diamond.

"La Huérfana" was one of the most splendid gems of the Spanish Crown Jewels. Remarkably, it has been reported that this large pearl was not discovered within an oyster but found in a shell bed in the Gulf of Panama.

La Huérfana was a remarkable pearl because of its perfect shape, generous size, and brilliant luster, and was once owned by Doña Isabel de Bobadilla, the first female governor of Cuba. La Huérfana was reported to have been destroyed when the Spanish palace in Madrid burned in the 18th century.
Continue to Part 2 of Famous Pearls​