A pearl nucleus is a bead or other object implanted into the gonad of a marine mollusk or into an existing pearl sac in the gonad or mantle of a freshwater mussel around which nacre deposition occurs.
[URL=filedata/fetch?id=451440&d=1634720446]
View attachment Golden SSP Nacre Thickness PurePearls.jfif​
[/URL]

The Pearl Nucleus and Nucleation/Grafting

Pearl farms vary depending on the type of mollusks being produced. But the one thing all pearl farms share is the process of nucleating the mollusks to produce a pearl. Every cultured pearl produced commercially today, except for Keshi pearls, are a result of the nucleation (or grafting) process, whether it be beaded or just tissue nucleated. [URL=filedata/fetch?id=451442&d=1645646740] 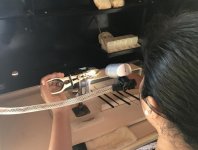 
The Units of Pearl Nuclei

The discovery of the attributes of the freshwater mussel shell in nucleus production is attributed to Mikimoto, who experimented with many materials. Due to this Japanese influence, nuclei are still sold today universally utilizing the ancient Japanese unit of length, the 'Bu'. One bu is equivalent to 1/100th of a shaku. The metric value of 1 bu is 3.03 mm, and the English value is 0.1193 of an inch.

The nucleus used in all saltwater pearl farming today is most often a perfectly round, mother-of-pearl bead. This bead is composed of mussel shell that has been cut, rounded, and polished.

A nucleus of high quality will be white, without calcium carbonate streaking (striation or banding), that may show through the pearl nacre. This is especially important for Akoya pearls, since the bead may be seen through the nacre, but less so in thickly coated pearls such as South Sea, Tahitian and Cortez. [URL=filedata/fetch?id=451441&d=1645646740] 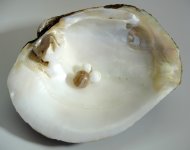 How the Nucleus Creates a Pearl

The first step in nucleating saltwater mollusks is making a small incision into the gonad or reproductive organ. The mother of pearl nucleus is then inserted into the reproductive organ and is then followed with a small piece of mantle tissue from a donor mollusk.
[URL=filedata/fetch?id=451443&d=1645646740]
View attachment IMG 6783​
[/URL]


How Many Times Can a Mollusk Be Nucleated?

Saltwater mollusks will only produce 1-2 pearls per nucleation process. The Akoya oyster can be nucleated with up to 5 beads, but the use of only 2 is most common.

South Sea and Tahitian mollusks (Pictada margaritifera and Pinctada maxima) accept only one nucleus at a time, but as they do not die at harvest, they may be nucleated several times.

If a particular mollusk has been successfully nucleated several times and consistently produces fine pearls, the mollusk is often returned to the wild to strengthen the genes of future generations of spat.

Freshwater pearls must also be nucleated, but in a different fashion. In lieu of the mother-of-pearl bead, freshwater pearl farmers nucleate their mussels with small pieces of mantle tissue. These mantle tissue pieces are not placed in the reproductive organ of the mussel, but inside the fleshy mantle tissue.

Because the mantle tissue is large and thick, and located on both sides of the shell, each mussel can accept many pieces of tissue. Most mussels receive 12 to 16 graft-tissue pieces on either side of the valve for a total of 24 to 32 per mussel!