Lovely combo, jeg! Are the ropes heavy around your neck?

86Corvettegirl, the green tahitians are faboulous, so lustrous. Beautiful color.
Jeg, your goldens are amazing.

Thanks, Charlotta. They were a gift from my hubby & definitely a favorite!

86C, I somehow missed seeing your photos! Your hubby chose well, the strand is beautiful! Love the layering.

Thank you, CricketBug. The green strand is smaller in mm size but very comfortable. Sometimes, it's just too hot & humid to wear larger, heavier strands.

Thank you 86C, CricketBug and Charlotta. No, they aren’t heavy at all CricketBug. I won’t wear them together in the summer, though.

Tahitian tin cup from PP with a Kamoka pendant and Kamoka harvest bracelet. 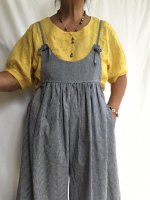 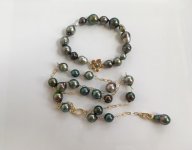 Jeg, that's a great Summer look! And I love the clasp on your bracelet! Is it specially from Kamoka? Did you special order the tin cup. I really like the pearls grouped together instead of evenly spaced out apart.

Thanks, 86C! The Kamoka bracelet came with the flower clasp. They’ve used it many times over the years and it’s a favorite of mine.

The tin cup was a project I worked on at Ruckus 2015. I purchased a temp strand of Tahitians, broke it apart, and worked on a layout. It ended up being longer than I was thinking, so I decided to make it into two necklaces. One is 22” the other 24”. All four ends of the orbit clasps open, which allows me to wear it several ways. I can hook them anywhere on the chain, besides adding pendants. Attaching some additional photos, some of which I have posted before somewhere. I am just wearing the shorter necklace in the photo I posted earlier.

This was a picture taken in Hawaii. Wrapped around twice and hooked into a lariat with a pendant from Na Hoku. 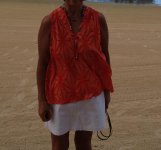 I posted this during the winter, but it’s both necklaces in one length with the ends randomly hooked to the chain. 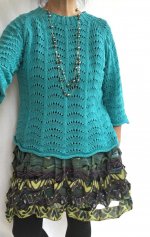 Jeg, those are wonderful necklaces with so much versatility!! I love the arrangement of the pearls. What an awesome job you did laying them out!!!
Last edited: May 7, 2019

It's a gorgeous tincup Jeg, the clasp on the bracelet is beautiful.
K

I love that your tin-cups have "working" ends of both halves of the clasp. So versatile. And the necklaces are gorgeous.

I am totally loving the versatility of these two strands, jeg. These two are close to my faves of your strands—not that I could actually pick out one favourite, LOL!

Looking elegant and classy 86C in your beautiful akoyas!

86Corvettegirl, those akoyas looks lovely on you, and it's a perfect size for a strand.

Today blue tahitian strand and studs from Wendy at Pearlescence. This is such a nice strand. 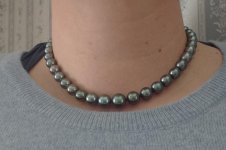 With my south sea strand from Cees. 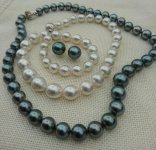 A note, as I can't get the pics to work for me and I am too lazy to dig out the camera - was dressing to impress today so left my more expensive strands at home and wore much less expensive baroque akoya because we all know that white pearls are real pearls, right? Rock Chick Tahitian look with Kamoka strand layered with leather and cotton stayed at home today...

I am sure the pearls looked amazing even though we don't get to see them KarinK.
Added my ombre tahitian rope from Cees since I am going away for dinner later. 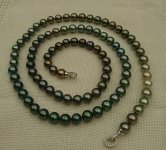 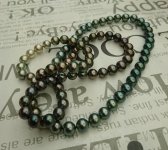 Once I got asked if my Rikiteas were magnetic beads KarinK...

Darn, KarinK! I would love to have seen either image- impressive or rock. I like the description of both.