Pattye, I got these to wear with my white SS octopus enhancer/pendant. I think they will be perfect for hot, humid days of Southern summer.

Bweaves - the pistachios...so jealous. I admit it. The kojima piece is one of my favorites you have, too. They go together perfectly.

86corvettegirl - I don't know if I've said this before, but my grandfather had a killer '86 Corvette too! His was black on top and silver on the bottom. Also, your SS set is really beautiful. You may have already mentioned it, but where is it from?

Charlotta - I love wen! I got some tahitians from them about 2 years ago that I'm just now working with. I was happily shocked at the quality too. Yours are almost identical in shape and size to your strand from PP. What a lucky find! And of course, you know we will want to see a neck shot when you have one

Lary007....I got them from an Aussie friend, David Norman, who wholesales & specializes in SS & Tahitians when he was in the States last month. The ring he had to size it up for me. I bought these in June, along with a pair of light golden SS dangle earrings.

BWeaves, nice, light looks. Did you weave your top? 86C, way to do your housecleaning in style! Charlotta, love the shapes in your T necklaces. I bet they look great nested.

I was out for a friends birthday lunch today. Luckily we were indoors. I took these off when I got outside. Its been warm for our area. Multi-colored Tahitian strands. 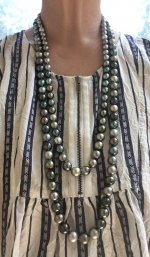 Jeg, your strands look beautiful together! I would love to find a multi color rope with a lot of color!

Thank you so much for sharing your gorgeous pearls with us.
J

Jeg, those are BEYOND stunning.

Charlotta, I'm so glad to hear of others that have had good experiences with Wen! The three I've gotten so far from that shop, I've been happily surprised at the quality!

Thanks so much, 86C, Red and Jesskat! Red, your collection of pearls is so fabulous and unique- take more photos!!!

The Traveling Pearl gathering some shell and pearl friends and heading to Hawaii. Aloha!

Traveling Pearl has some lovely company there! Have a wonderful time.

One of the pearls from Wen Pearls was broken, the tip of the drop was missing. Otherwise a gorgeous pearl. So I made it into a pendant. First I had to even out the pearl with sandpaper. Then I cut of a hatpin for the bottom drillhole and glued it in place, than I glued on a pearlcup on the top. 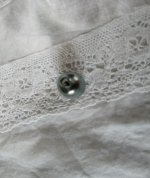 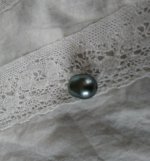 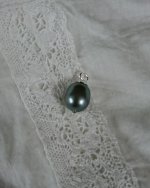 The photos are a bit blurry but the light is horrible today. Really hot but overcast. I am going to attatch it to a chain ones it dried for some hours. Also did make an extender for my tahitian keshi strand. The stand is almost 20 inch and the extender is about 3 inch 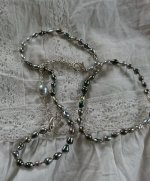 And finally I finished my smallish freshwater strands. They are actually 3 strands I bought from Pearllunar over several months. It was cheaper to bid on them, one at a time and then the long wait for the packages to arrive. They are 2.5-3mm pearls. The drillholes are so small I had to use the SoftFlex wire in very fine. Thank you someone on the forum who gave me the idea to try that wire. I had almost given up on trying to knot those with silk. The necklaces are 19 and 30 inch and the extenders are 3 inches with the white freshwater pearl. 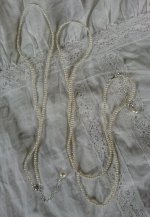 Thank you everone for the kind words on tahitians.

Did take some photos with the tahitians, though a bit blurry. Also took one of the new pendant/necklace 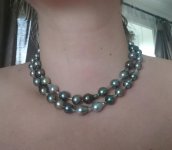 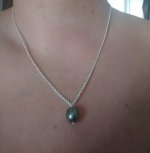 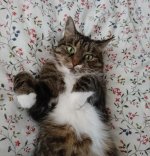 And finally one of my favorite oldish clasps 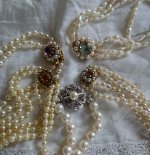 Also enjoying a day of since I will work for 6 straight days so relaxing and making changes on jewelry.

Love the "fix" for the broken pearl...well done.
But those clasps are amazing! I have really gotten into searching for vintage clasps...those are amazing.
http://www.oceanscovejewelry.com
Instagram: Ocean's Cove

I like the neck shot of the Tahitians.
And your kitty...such beautiful coloring, and the green eyes--!

Jeg, the Traveling Pearl is in beautiful company! Enjoy Hawaii!

Charlotta, love the fix on the broken Tahitian! Too beautiful of a pearl not to use. Great extenders on your keshi & the small FW. I have 2 100 inch 3-4mm FW strands (no clasp) that I wrap, layer or twist when it's a little cooler. Tahitians look wonderful & I love those clasps!! Where do you find them??
You Kitty looks like a sweetie!

Dashing out for a quick trip to the library, I stopped to brush my teeth, looked up and this is what I saw in the mirror. The light was unreal today; the pearls were just glowing and metallic . 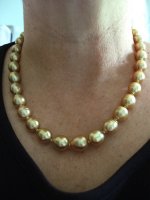 Beautiful, PD. I love the glow of GSS!!

JEG: Yes, handwoven. And I love your necklaces. Amazing.