Thank you BWeaves, GemGeek, 86C and Katbran! You guys are way too nice! I do plan on posting, I just don’t want to hog all the space!

Old school pearls today, along with some new ones.

My ruby hearts with akoya drops. My birthday necklace from Mom worn with new baroque akoyas from PP. Lily Pad ring from Kojima. 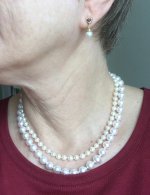 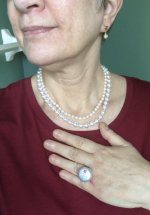 The baroque akoyas make any pearls they sit next to look dull. My birthday necklace is quite awesome on its own.

Did anyone else think the holidays were a blur?? I hope everyone has had an enjoyable month, trying to catch up on this thread a bit. 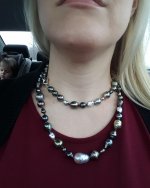 Mixed baroque tahitian strand on our way to Christmas mass. Does anyone else scope out other pearl enthusiasts when they're in public? The flute player at my church had a BEAUTIFUL tahitian harvest strand, probably a Kamoka one. I didn't have time to hunt her down after service, I wouldn't be surprised if she's on this forum too! 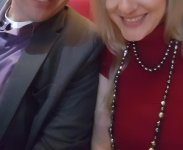 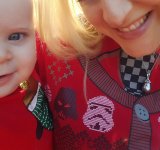 Large tahitian silver pendant from Pearlescence, paired with a Star Wars Xmas sweater. Because you can't take yourself too seriously.

BWeaves said:
The baroque akoyas make any pearls they sit next to look dull. My birthday necklace is quite awesome on its own.
Click to expand...

BWeaves - are your beautiful white baroque akoyas the 9.5-10 mm from the VIP private launch? I waited too long to purchase

My white baroque akoyas are 9mm from earlier this year from PP. They are very pink compared to my natural white Hanadamas, and obviously have a very subtle drop shape, but they read as round and smooth from a distance. Shine and luster and orient are comparible to my Hanadamas. Surface smoothness and roundness, they do not compare. I'm actually tempted to get another strand, but a different length.

BWeaves said:
My white baroque akoyas are 9mm from earlier this year from PP. They are very pink compared to my natural white Hanadamas, and obviously have a very subtle drop shape, but they read as round and smooth from a distance. Shine and luster and orient are comparible to my Hanadamas. Surface smoothness and roundness, they do not compare. I'm actually tempted to get another strand, but a different length.

CBPearlLover: Your mixed T strand is gorgeous.
Click to expand...

BWeaves, that strand of baroques is really glowing!

CBP - Lovely harvest strand - I always wear mine doubled as long it moves around a bit too much for me. But I love mixed sizes and colours !
https://www.instagram.com/pearlzaustralia/?hl=en
https://www.etsy.com/shop/pearlzaustralia 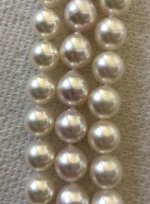 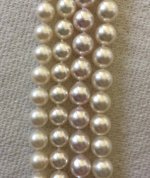 All pearls from PP except for my Mom's strand. All are very white except for the baroque strand.

I wish the baroques weren't pinked. I don't mind pinking, but they're really pink compared to my other pinked pearls. They make my regular pinked pearls look yellow. On the other hand, the baroques glow like nobody's business.
Last edited: Jan 1, 2019

Interesting comparison! I'm maybe in the minority that I think the heavily pinked pearls are very nice, actually.

In any case, with all those choices, you can't go wrong!

That second photo is interesting. I don't recall seeing a photo of a strand of Freshadamas next to a strand of natural white handamas before. The difference in luster is striking.

Wearing my three Fiji drops and my new Kamoka ring as I enjoy the first day of the year. Here is a comparison of the colors. I love these shades. 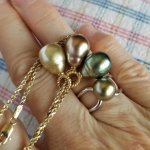 The Kamoka pearl has a lively green halo that moves about and changes in appearance in different lighting. Trying to capture it here, but it is more interesting in person, trust me. 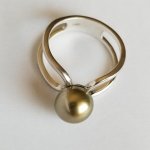 This ring setting is 1/2 size smaller than I usually wear, but the slim wires allow it to still slip on, and then it stays in place. So, a winner in my book.

Andrew: Don't get me wrong. For decades I thought pinked pearls were the only good pearls. I have so many different colors now, and I love them all. But these particular baroques are way pinker than my other pinked pearls. In my photo I'm comparing them only to my very white pearls.

I get funny looks from a few of my co-irkers when they see me in Kasumi or ripples or blues or pistachios or multi-colored Ts. They know I don't wear fakes (usually), but they've never seen anything like some of these pearls.

PS. Red, I love those Fiji pendants and ring.

BW thank you for that awesome comparison! You can really see the differences in luster and colors. That's funny about how your coworkers see the pearls.

Red, the Fijis are so pretty! Great way to welcome in the new year!

I just got back home & back to internet service, Hubby & I went off the grid to recharge for New Years. I come back to some gorgeous new pearl posts. Ladies, you continue amaze & inspire me. I'm loving them all!!
K

Red - I love the three Fiji pearls - they are such beautiful colours and look marvellous together. Like a tree in autumn . And your ring .. is that a Pistachio pearl ? Might be my ancient monitor ... it's a lovely shade !
https://www.instagram.com/pearlzaustralia/?hl=en
https://www.etsy.com/shop/pearlzaustralia

Those colors are so great, Red! Love the Fiji’s and Katbran’s tree description. I want to see that Kamoka in person!

Party pearls= ombré strand doubled with a strand of green Tahitians. All from PP. 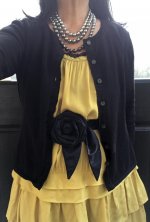 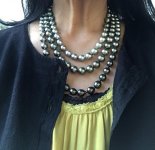 Over my break I made my own harvest strand since I always miss them on PP. it is made of an old champagne SSP strand I stopped wearing, new golds, new white smal SSP and 4 edisons on oak BS 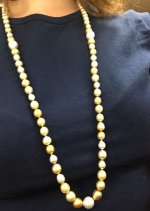 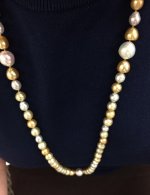