Great stuff! Look at that choker! All lovely variations.

And now for something completely different: 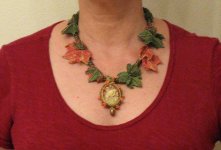 A very different kind of stringing, seed beads with a shell cameo and a faux pearl drop. I wish it were a real drop, but I could always swap out the pearl.

Did you do this?!?! It's amazing, and of course perfect for the season with your top.

I'm a cloth weaver, not a bead weaver, although I've done some stringing. I bought the necklace from another artist. It was her show piece. I think I ruined her display by buying it, but I just love to wear it in the fall.

Besides, I love shell cameos and pearls, so I knew it was coming home with me. The artist did an amazing job of making the leaves curl. I still don't know how she did it.

BWeaves what a wonderful intricate piece!

That's fabulous BWeaves! YES, you could up the ante and switch out the pearl to a real one in the future ... how fun it would be to search for the perfect pearl!
Cathy

I would love to see a closeup of that necklace BWeaves! I've never seen anything like it and it is perfect for the fall!

I may not comment on all the posts, but I love this thread. Seeing everyone wearing their beauties makes me think I don't wear mine enough and your photos provide ideas and inspirations to do more with my pearls. Thank you all!
P

Pearl Dreams - I love that heart shaped keshi!
ckrickett - It's nice seeing little dude get out and about and you sure have been busy with projects! Love them all!
JerseyPearl - Colorful tin cup - beautiful!
BWeaves - You look great in both the dog collar and the leaves!

I had a little fun today with some bronzy, metallic baroque FWP that I was not wearing as a strand.

I bought some inexpensive (dirt cheap, actually) rose gold colored chain, head / eye pins and clasp findings at Michaels and combined them with a copper and resin pendant I also had been neglecting, to make this necklace. I also made a 2" extender, in case I ever want to wear it longer.

The base metal eye pins are a bit thicker than the silver and gold filled pins I normally use, and I had to use my bead reamer to widen the drill hole a bit.

I did not wrap both ends. Using the eye pins, it was only necessary to wrap on one end. The eye pin can be opened like a jump ring to connect to the wrapped ring of the previous pearl. It went fast.

That is so much fun Pearl Dreams!
WestPearls.com My Shop
West Pearls on Etsy

I've been out of town for a week but I just got back! I brought a few pearly pieces with me but I mostly wore my ripple tin cup
the light in the room washes out the pearls and makes them look so brassy, they have better colors in real light. 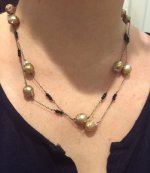 Thanks ckrickett! Your necklace is pretty too!

Today is my baroque Tahitians from PPs sale last year, and my little temp strand of 7-8 mm baroque and circled tahitians 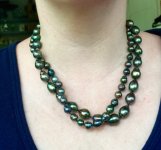 JerseyPearl, your sapphire/pearl necklace is stunning and you wear it well!

Love all the pearls! Gorgeous each and every one! Here's my latest: 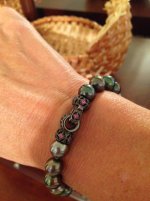 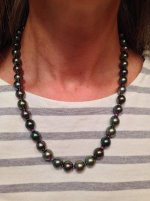 Here's a closeup of the beaded necklace for you: 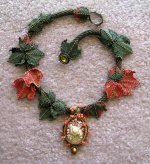 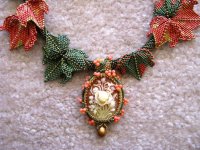 I love the close ups! This is a piece of wearable art!
http://www.oceanscovejewelry.com
Instagram: Ocean's Cove

Anyone else like shell cameos? My mother collected them when we lived in England in the 1960s. Everyone else was going mod, but my mother loved the Victorian stuff. I started collecting them, too. 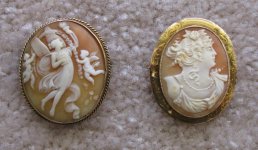 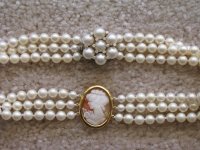 My wedding dog collar custom made in 1982. I found the cameo at a jewelry store and it had no setting and he put a yellow gold frame around it. The jeweler made the clasp different (white gold) per my request, so I could wear either the cameo or the clasp in front for different looks. He tried to talk me into bigger diamonds, and I just couldn't afford the extra money at the time. In hindsight, I wish I had splurged an extra $500 for 5 pointers, instead of the 3 pointers I asked for. I added the smaller pearls near the cameo and the clasp recently, as I wanted the necklace to fit a little looser and I didn't have enough extra pearls from the original strands. 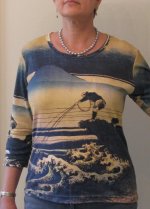 And today it's my Vietnamese blue akoya necklace with blue topaz and diamond earrings, and my Japanese fisherman top.
Last edited: Oct 11, 2015