Thanks for reporting in, Jeg! I have been thinking about you and wondering. Sorry your adventure was cut short, but glad you are safely home!!!
S

Sarahsmile, those earrings are lovely and the tin cup is perfect for St Patrick’s day.
Gemandpearlover, I also vote for all pearls being shown here, not just the very best ones - I love seeing how people wear their pearls IRL.
My contribution- a fireball pendant today 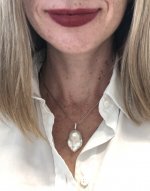 86CorvetteGirl, hope you are healing well. What a thing to have happen!

Sarahsmile87, I love that tin cup of emeralds and FW, it's gorgeous!

jeg! So happy to hear from you, I've been thinking of you on your trip and wondering how it was going. Sorry it got cut short but glad you had a good time while there.

Thank you, JillM . It's been a slow process. A lot of the bruising around my eye is gone. I still have some on the side of my face but now the knot/bump on my cheek has bruising showing up. The knot is not as sore as it was & has gone down a little. So, I suppose I'll be dealing with that bruising as time goes on. Recovery is going to take a while but I'll get there.

Jeg, glad you made it back safe & sound but sorry you had to cut your trip short.

CathyKeshi said:
A number of years ago, carrying a basket of wash to the basement laundry, when I got to the last step, fell into the spare tire Mr. left at the bottom ... cracked my knee cap on the inner rim of the tire ... it all ended well, as I retired that day from all basement activities and all laundry duties. It has resulted in needing a few more clothes to cover weird laundry incidents Mr. didn't anticipate LOL ...

Cathy I absolutely love you. You always seem to make me smile

Gemandpearlover said:
Quick question for everyone. Is this thread more for special pearls as is stated or more for any pearls that you just enjoy wearing? Thanks!
Click to expand...

The thread is for whatever pearl you are wearing. You can even post the same pearls over and over and over. We even like to see the outfits that go with the pearls. Post away! I look forward to seeing your pearls
S

Hope everyone is keeping well in these troubling times.
Keeping my spirits up with pearls - cherry-toned tahitians again. 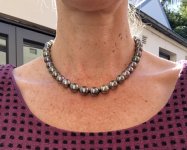 sarahsmile87, the freshwater pearl and emerald tincup is gorgeous.
SydK, the fireball pendant and cherry tahitians are really pretty.

SydK, those cherry Tahitians are gorgeous!!!

Oh what pretty pearls; you all are cheering me up! If only I could take a decent pearl photo ... AND we had sun in PA ... although we have finally gotten some sun Maybe I'll try again.
Cathy

Well, who knew ... it seems Walter has hidden talents My new Maki-e pearl pendant. Hand painted in lacquer and 22K gold paint and embossing, and inlaid with tiny squares of abalone shell, which change color and glow like little LED lights. The pearl has lovely reflections and overtones. About 13mm, so not the biggest, nor the smallest size, and set with a simple 18K ring bail because why compete with this artistry? Our own pearl and jewel magician Sarah from Oceans Cove was kind enough to chose this pearl for me in Tucson, and then set it. I am VERY lucky to have such pearl people as dear friends. Shown on my 18K yellow gold woven chain from Venice, Italy; it also looks nice on a long snake chain from Italy. THANK YOU, Sarah! Oh this is almost too ironic and funny for words. New computer, lost most of my old softwre, and I've fallen victim to the flipped photos virus with no way to fix LOL ... 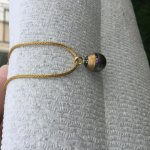 Ooh, that is so pretty! 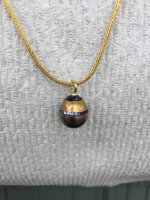 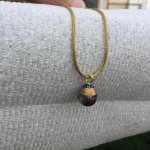 Thank You, Pearl Dreams! Oh, the irony, I can't flip my own photos lol. JerseyPearl did such a wonderful job choosing a pearl for me and setting it; it really shines in sunlight, and the pearl itself is beautiful, with lots of pink and green overtones. I'm so lucky!
Cathy

CathyKeshi, that is gorgeous and so creative! The abalone is beautiful.

Wowza! Too many great pearls since I was last on. I love them all. I've been busy setting up my home office again to work from home. First they were only going to have us work from home on Mondays. Then on the first Monday they told us to work from home until further notice. I'm actually thrilled about that bit.

This was my last day in the office. Kojima opal and Tahitian drop earrings, and La Perlagrina pendant from Kamoka. 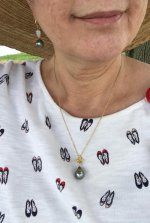 I've been wearing pearls at home the last few days, but forgot to take photos. BUT, today I received my little h pendant. I bought it at my first Ruckus, and dropped it on my tile floor and broke one of the emerald points. There were two points sticking out the side and I broke the top one. 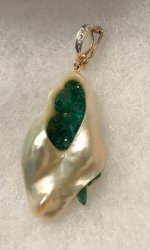 I was able to glue the broken bit back on using the type of glue that Hisano recommended, and that worked. But it came loose after a few years and broke again. Hisano graciously fixed it for me, and it just arrived back to me today. It looks even better! Thank you Hisano!!!!

Now it has 3 points. 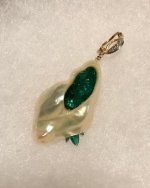 I solemnly swear that from now on, I will only put it on and take it off while leaning over my soft bed.

Wow, BWeaves, your pearls look gorgeous; love those opal/Tahitian earrings. And I suspect your emerald geode pendant is even more beautiful than it was before!

Thanks SydK. The abalone changes colors as it moves; it's like a little egg of those color changing LED lights our ... er ... we are all fond of LOL. Here'a another few photos, from JerseyPearl, that shows the rainbow orient and top of the pearl better, in brighter light. I beg her indulgence for using her photos
View attachment 73230View attachment 73231View attachment 73232
Cathy

CathyKeshi, that pendant is beautiful, like a Fabergé egg.

BWeaves, I love the pearl and emerald Hisano pendant. Emeralds are my birthstone so, like pearls, I can’t have too many.
S