enkeli I really love that look! Casual but gorgeous.

Bweaves, your white look is breathtaking! Those clasps are so special!!! Can you tell me what size are your hanadama studs? Those are on my wish lust

My Hanadama studs are 9 mm, and they are pinked, because the natural whites were just too white next to my face. You can see in my photos that the earrings are pinker than the necklaces, which are both silvery white.

My natural white Hanadama rope and Nana's replacement Freshadamas are all 8 mm. (I would have gone smaller on the Freshies, but they didn't have any smaller than 8 mm at the time.) I felt that the studs needed to be either bigger or smaller than 8 mm or it would all look too matchy matchy. Since I'd already owned 7 mm studs, and felt that they were now too small, and I just bought black and white Tahitian studs from Komoka in 9mm and liked the size, I went with 9 mm Hanadamas.

Also, I had PP put bigger earring backs on my studs. I find them easier to handle and they make the earrings sit better on my earlobe.

I have a sister-in-law who said, "As I get older, I do not get fatter, but I get thicker." She's right. I swear my earlobes are thicker than they used to be. Old earrings now seem "tight" to me, and too small for my earlobes.

BWeaves- you look so crisp all in white. Looks beautiful together.

Today is a drippy, wet day. I was all covered up running errands.
Kamoka posts- 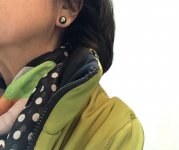 This IS Seattle, after all... This was originally a strand from a PP sale a long time ago. I decided to restring it into bracelets so it would get more wear. (and it is!)

JEG: Very pretty. What did you use as a clasp?

As much as I love the orbit clasp, I've discovered that I cannot work it with one hand for a bracelet.

Thanks BWeaves! I used orbit clasps. I have worn bracelets of all sorts forever, so I seem to be able to manage most any clasp. I thought about using the original ball clasp, but I wanted both bracelets to match so I went with what I had two of. 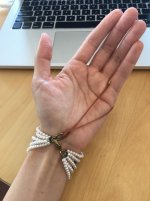 Here is another everyday tool that works- 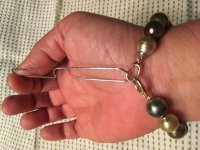 Y'all are brilliant!!! I'll have to remember those tips next time I'm cursing at a bracelet!

Jeg, those Ts look very colorful. I love seeing my T colors so I tend to wear ropes, but I think I need more bracelets!

Just wearing my black n white pendants in this cloudy day. Pearls with leather jacket again. Its because 90% of my jackets are leather hahaha.

I love all your latest posts, especially Asurazzy's flower pendant!

Thursday night I went to the opening of the new GIA museum exhibit Centuries of Opulence: Jewels of India. Not owning much in the way of Indian Jewelry, I went with pearls.

Light gold round SS pendant and drop earrings with a harvest strand. Not in focus, but I felt so happy when I got home that I thought I would share. Chester is in the background ignoring his selfie snapping mom. 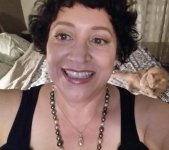 I'm admiring all the pearls here but I don't want to be impolite, but Chester is the one I'm focusing on now. Sooo cute!

I like your layered look, GemGeek. I'm always iffy about layering, but those go together well.

Thanks for the ideas for bracelet clasping, JEG. I'll have to try those.

Thursday night I went to the opening of the new GIA museum exhibit Centuries of Opulence: Jewels of India. Not owning much in the way of Indian Jewelry, I went with pearls.

Light gold round SS pendant and drop earrings with a harvest strand. Not in focus, but I felt so happy when I got home that I thought I would share. Chester is in the background ignoring his selfie snapping mom.

Wow your eyebrows are so on point! Im having problems with my eyebrows because its always uneven. Btw do you use brow pencils or something more fancier? Talks about harvest strand, must it be from the same harvest or you can put all sort type if ine color pearls and call them 'harvest'?

I let my eyebrows grow back in and use Lancôme powder brow pencil in taupe to shape them by fudging the outside to be a bit farther out. Here is a dusk photo of the pearls. A harvest strand is supposed to be representative of all the kinds of pearls that would be in one harvest, but it's open to interpretation. I have always wanted one. 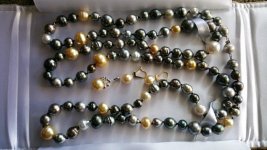 asurazzy said:
Talks about harvest strand, must it be from the same harvest or you can put all sort type if ine color pearls and call them 'harvest'?
Click to expand...

I'm a purist when it comes to harvest strands, since I own a Tahitian one from Kamoka, and a South Sea one from an Indonesian pearl farmer, and both actually harvest pearls and designed these strands. You can put together your own and put in whatever you like, but if you aren't a pearl farmer, they would be a harvest strand style of necklace.