Ok, so I had this brilliant idea the other day. Then I went online to research how I would produce it, and found out someone else had the same ingenious idea several years ago, which was only slightly disappointing because I could just buy it and not have to figure out how to make it (and likely never get around to actually doing so ) I thought some of you beaders might be interested in these also...

They are leverback settings that allow you to wear any stud earring as a leverback! Cool, eh? They actually work pretty well, you CAN see the post/backing if you are looking closely, but I'm betting that most wouldn't notice (and my ears are pretty flat against my head, so my earrings esp. hoops and leverbacks seem to be a bit more "sideways" than those who have ears that turn slightly front, so probably more a problem with me than most), but here are some pics:

One of my metallic baroque studs turned leverback:

I think I'm going to have some fun with these!

If anyone is interested, I've found them on etsy. They are called Convertiblez.
~Melissa

Fascinating! Someone scooped your idea.

Well, I'll be durned! That is very clever. I like the idea of the various jackets also. Well, Melissa, there's always room for a better mouse trap (or earring converter)!
Pattye

Neat! Thanks for sharing!

I noticed this setting a while back and have been considering setting a pair of pearls in that design. Anyone else has them (leverbacks with a peg) who are willing to share an ear shot?

That is so cool! Thanks for sharing!
Amrita

I bought 2 pairs of these last year online (gold tone and silver tone). It seemed like a great idea but my earrings didn't hang right, and the part that held the stud post was too obvious. I'm afraid mine ended up in the trash....

Edit: The ones I bought were not from the Etsy store. There was a conical friction nut attached to the leverback. If I can find the link I'll post it.

Edit again: I found the brand (Earrs) and link, but it was a French hook rather than a leverback-- same effect, though- stud passes through the grippy cone. They come in gold tone and silver tone: http://www.earrs.com/jewelry-accessories/pin-and-earring-converters/ptw-converter-silver.html.
I tried various of my gemstone studs in them but they just looked wrong, and the weight pulled them to face a bit downward. Anyway, if you are going to try any of these sorts of convertors, don't buy the ones I did!
Last edited: Feb 25, 2014

I'm totally getting a pair of these. I have a bunch of studs I've been wanting to change to leverbacks and these will be a good substitute till that happens! I noticed they are on sale FYI.
Check out my jewelry here

KarinK said:
I noticed this setting a while back and have been considering setting a pair of pearls in that design. Anyone else has them (leverbacks with a peg) who are willing to share an ear shot?

That leverback style has been quite popular in the US for some time. I have quite a few pair and like them alot; I'll try for a selfie later. Not easy for me to take.
Pattye

Here are the photos of the leverback findings. These are button shape freshwater pearls, approx 10.5mm. The drop from top of leverback to where the hinge attaches is approx 12-13mm. These earrings were bought already made up some time ago. 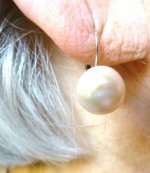 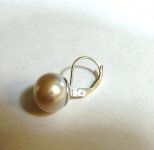 Applause! Applause to Patricia for her terrific selfie ear shot!!! Thank you!

What a wonderful gadget. Want!

Honestly, BAS, you have me in hysterics & laughing!!!! Poor old ear, double pierced cause of a badly torn lobe on the left ear, only for my P-G friends, lol.
Pattye

Pretty pearl, Pattye. Lovely lobes. I'm in awe of your co-ordination too! Just tried to take an ear slefie and got a dozen shots of hair…. no, not ear hair you guys.

Marianne said:
Pretty pearl, Pattye. Lovely lobes. I'm in awe of your co-ordination too! Just tried to take an ear slefie and got a dozen shots of hair?. no, not ear hair you guys.
Click to expand...

Agreed, ear selfies are the hardest and worst. After all that contorting there's always something wrong with the shot. I never would have guessed these leverback stud jackets existed. What a clever invention!
Sarah Blue

"She is mine own, and I as rich in having such a jewel as twenty seas, if all their sand were pearl, the water nectar, and the rocks pure gold." ~ William Shakespeare

Tip for ear selfie... Last time I stood in front of the mirror so I could see in the reflextion what I was taking a picture of

Here are the photos of the leverback findings. These are button shape freshwater pearls, approx 10.5mm. The drop from top of leverback to where the hinge attaches is approx 12-13mm. These earrings were bought already made up some time ago.

LOL! I am officially coming out of lurkdom for this. Patteye, where did you purchase these leverbacks from? They hide the posts beautifully! I have pearl studs that I'd love to wear as drops.

I think this is an example of leverbacks with a peg. Meaning you would remove the pearl from a post earring and glue it to the peg on the lever back finding.

I also have some pearl earrings that are set like Pattye's on leverback findings. (They came that way, they aren't an adaptation.)

I just got my convertiblez earrings. I tried them with a small set of studs. Here's my issue with these: 1) they did not come with those nice small clear plastic ear nuts and with smaller stud earrings regular ear nuts are obviously visible; I will need to go and get a set of these clear ear nuts; 2) the other thing is that with long hair, I would be worried that my hair would get tangled in the ear nut and accidentally pull it off. I've had this happen with stud earrings on my own ears. I would feel safe wearings these only with my hair up and out of the way. Otherwise, I think these are interesting and a nice, cheap alternative to having studs converted.
Check out my jewelry here
You must log in or register to reply here.
Share:
Facebook Twitter Reddit Pinterest Tumblr WhatsApp Email Share Link
Top