I am having Tahitian envy. Perfect! It's like getting different necklaces just by walking around. And I adore the exotics. They look amazing on your skin.

I am having California envy...we're to get our 3rd Nor'easter in a row on Tuesday. The prediction at this point is 6-12" but if the storm tracks 15 miles closer to shore we could get a foot and a half of snow.
Our daughter is home for spring break and can help us clear it, though.

I just edited posts 4, 7 and 42 because I've improved my technique.

In posts 4 and 7 I explain why leaving a longer initial tail is useful, and how to conceal the cut-off end of the tail of thread at the start of the necklace just the way we do when finishing, for a neater, tidier look.

In post 42 I changed the instructions for making an endless necklace. The new technique increases security (by increasing the number of back-knots from 3 to 5), balances the placement of the knots on the back of your neck (by initially stringing on the last 3 pearls from one end of the necklace and the first 3 pearls from the other end of the necklace) and tells you how to conceal the initial tail of thread before cutting it off, for a neater look.
Always keep learning!

I've been thinking about this lately and thought I'd toss it out for the experts !!

I'm sure this has happened to some of you... you knot a strand and have the clasp on it ... the the client decides they might prefer a different clasp. So you have to redo the whole thing. ( I'm not talking about a custom order where all this is sorted out to start with ) . What about knotting the necklace but not knotting the last three or first three and leaving a long tail of thread at each end. The you can show the necklace with a clasp 'attached' ( just pulled up to the ends) . If they don't like that clasp then it's easy to attach something else without redoing the whole thing ? Does this make sense ??
https://www.instagram.com/pearlzaustralia/?hl=en
https://www.etsy.com/shop/pearlzaustralia

Yes. It makes sense to me.

Finishing the other end would mean threading the tail onto a fresh needle, to then put gimp on, pass through the clasp and back-knot with. But the thread was already doubled, so the thread on that needle would now be 4 threads thick, which could make back-knotting a bit tricky if the holes aren't large. Also the gimp might not fit on the quadrupled thread.

The solution is to only thread the fresh needle with one of the 2 threads of the tail, and trim off the remaining thread close to the pearl it emerges from, for neatness. This way the thread on the needle is merely doubled, not quadrupled.

You would have to leave quite a long tail for ease and maneuverability. I'd say 9-12".

There is another solution but it is not my preferred one: knot the strand onto a jump ring on either end. The jump ring can then be attached to any clasp. I don't prefer this as it makes for a larger gap between the pearls where the clasp is. The jump ring has to be large enough to accommodate your gimp and the clasp while still allowing free movement.

I generally string my pearls onto temporary wire and bead bumpers to show what it will look like. I usually just loop the wire through the clasp and then tie it off for a quick photo.
http://www.oceanscovejewelry.com
Instagram: Ocean's Cove

I also string them on wire first-- just to keep them in order and not have them roll off the table onto the floor.
K


I do normally put them on wire first but I was trying to think of a way to just do it all at once and leave the clasp options open... lol I'm so lazy...

PD - I agree with you about the jump rings.. and you are right about the problems created by extra threads .I'd need to drill the end pearls a bit more... hmmmmm I'll have to think on this... maybe two needles..one for each thread? I may have to try this and see..

The problem with drilling the holes wider in the end pearls is that sometimes people like to rearrange their pearls for subsequent restringings, especially in multicolored strands. I do this fairly often.

Pearl Dreams said:
I also string them on wire first-- just to keep them in order and not have them roll off the table onto the floor.
Click to expand...

Well, that never happens to me (hahaha, and if you believe that one...)
http://www.oceanscovejewelry.com
Instagram: Ocean's Cove

You don't EVER have clients who want to rearrange their necklaces either, JerseyPearl LOL
Cathy

CathyKeshi said:
You don't EVER have clients who want to rearrange their necklaces either, JerseyPearl LOL
Click to expand...

Never...lol...but really though, isn't the ability to rework a piece all part of the fun?! Like redecorating, but without having to paint. Hope you're enjoying yours.
http://www.oceanscovejewelry.com
Instagram: Ocean's Cove

You know I do ... LOVE those pieces. One needs restrung a bit shorter though ... slinking away now ....
Cathy

I just posted this photo on Show us Your Pearls in Action, but maybe it belongs here instead, since it's about thread. The photo is huge; I wanted the thread color to be visible.

I wasn't really happy with the somewhat garish look of Teal thread with my Tahitians, so I decided to restring with Navy. I had previously tried Black and Night but they were a bit too dark.
As for Navy, I love it! For strands that run medium/dark with more gray/blue than green, it's perfect. I also shortened the larger near-round strand and replaced a few more of the not-as-nice pearls with nicer ones. I am now able to nest these 2 strands. Sometimes I wear the smaller strand as a bracelet.

It is wonderful to be able to do one's own stringing and I just want to encourage anyone who hasn't tried it to do so. It costs very little-- a bit of thread, a few wire needles and gimp. And it will change your life, really. 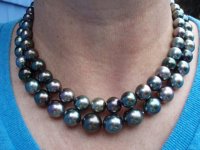 Pearl Dreams that’s fantastic. I’m glad to hear about the navy thread, the color makes all the difference. And yes, being able to knot your own pearls is life changing. I’m about to restring my ringed Tahitian strand because I’d like to take out a couple of pearls for earrings and see if the shorter length will nest with another strand. I’m not sure when it would get done if I had to send it out to be strung by someone else, not to mention dealing with the cost.

Nice nest . I too have been happy with navy and Tahitians!

Oh, WOW, PD! And look how the lustrous pearls reflect your sweater! Experimenting with different color thread is great fun! NAVY is a super choice and love the nesting! Thank you for sharing the photo in both places! You are def a pro at tidy knots!!
Pattye