What should I do with all these??

Ooohhh went home from work n found a package. Opened it n voila...pearls with very nice color! The blue baroque akoya look like psychedelics fukushima rat poop. I lovee it!! The Fijian are
Blue...green..copper...goldenish...ohhh my..my...what should I do with it??? Ring or pendant?? Or both?? Maybe pair it with small colored gemstones...topaz..peridot..maybe citrine?? Ofcourse set all in yellow gold to give more color pop! I just took pics of them thinking maybe round blue n baroque blues together? Or..graduated rounds or...make an extra long pendant with all of them! If anyone got Idea please turn em in! Planning to set it next month.
Btw..got these from Cees. Since everybody been having a Cees fever so I figure to poke my head in n contacted the virus!
Ohhh yeeasss I also grabbed a strand of Tahiti from Cees. It's not yet arrived but he gave me a photo of it. 13.20 mm to 11 mm. Mine Its the upper strand. I want to insert like maybe gold spacer for every 5 pearls...n get a clasp..but I don't want any old clasp...must be a fab clasp..dunno what it is yet but fun to think about! So pleaseee throw in sum Ideas!

Lovely treasures, Azuazzy - you can't go wrong with these!

Yeesss been lurking to pinterest for some inspiration!
L

Adore those blues! Oh and look at those stunning Tahitan baubles... SIGH!

The colors are out of this world-- that blue baroque is crazy!

Love your description! And your pearls are outstanding. Enjoy them all!
http://www.oceanscovejewelry.com
Instagram: Ocean's Cove

Ya Ladonna! Cees have facebook as well. You can ask him bout pearls n gemstone. He got it all.
They r very nice Battah. Would like to set them into something that I can show off their color.
Pearl dream the blue baroque its like an oyster got radiation in some nuclear polluted water n produce that! Well..in my mind anyway hahaha!
Im just playing with the arrangement JerseyPearl. Ill most more photos on how I want them set n maybe you can tell me which one is good since u got the eye for designs.

Wow! They are stunning! Love the blues, the pistachio Fiji and of course your colourful strand of Ts! Gorgeous!
S

All stunning pearls, but those Fijian pearls are stunning. I see a pendant for the biggest one, a ring with the next one, and the three smallest set into a bracelet. Love the colors, the blue, the brown and the Fijian greens.

Thank you Sanippy, Sunseeker n Red! I will create drawings of design n poll it of what people think here its best.

Etsy has lotsa clasps so enjoy browsing
Click to expand...

Yaa I have looked! Mostly 14 k. N expensive...any other Idea where I can find unual clasp? Or maybe Can custom made a clasp or something.

Well I just got an idea for what I want to do with the Tahitian strand.

Ill post it in here so I can remember the steps I need to do. First I will canibalize one of my necklace component.
1. I got this golden baroque Southsea pearls that I almost never wear. I dont really like this necklace. Its gold on gold so no visible contrast. The necklace have 13 22k gold n diamonds spacers. I will break the necklace and take the spacers, keep the pearls for something else. Then I will use the spacers for the new Tahitian. Put 1 spacer every 2 or 3 pearls. 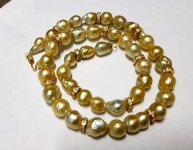 2. I actually ordered a ring to be made for me in the form of gold flower with big gold pearl in the middle. The pearl have 1 black dent on the underside but it will be drilled n set into the flower so wont be visible. I told the jeweller dont made that into a ring, instead make that into a big flower clasp with 1 gold loop on each side. N he said ok because they only start to produce the petals so no problem with that. The example of the flower is like in the photo, but it will be a clasp and it will be bigger. The golden pearl is bit big, 10.22 gr I honestly dont know the mome for that or how many mm but I want the petals to show not covered by the pearl.

3. After the clasp done then I will assemble the necklace. Clasp Will be done in 3 more weeks. Ill post of the actual Tahitian strand after I will recieve it on my doorstep on Tuesday. This can be called as Necklace project no.2.

Oooohh brightly coloured tahitian pearls! That's my weak spot)) I would take first, second and forth pearl (I'm counting on photo Nº4) and turn into a bubble ring. And I also like your idea of mixing the blue tahitian with blue akoya. A plentiful of variants!

Cees pearls are incredible. I'm surprised he wasn't the star vendor of this forum before)) please show it to us when it arrives) so that filigree type of flower will be a clasp as well? What type of clasp - box clasp? Please please please show it in details when ready because I'm currently struggling with custom clasp theme and really need some input))
Pearl and opal specialist
Institute of Gemology of Spain, IGE, Madrid
www.NoMorePearls.com

Hi Lugana! Im thinking to make bubble rings as well but with 3 smaller pearls. 2 big pearls thinking to make it as missmatch earrings with additional of gemstones. My coworker told me she saw a fish with the deep blue baroque n I might turn it into a fish with fish head n tail made out of gold, tiny small faceted amethyst eye n dangling deep blue zircon hanging from the tail.
The clasp isnt a box clasp. Just a simple filigree gold pearl flower clasp with 1 gold hoop on each side so I cant hook it on one side and knot one of the pearl strand end on the other side. Ill post a drawing out of it tomorrow.

My strand from Cees.

My strand from Cees.

Sorry long reply. I got my strand long ago but just have the time to post now! I really like it! The colors r beautiful n eye popping! I took it to work n show it my my coworker who loves to make her own jewelleries n she said she fell in love with it! Too bad its mine now haaha! I told her I want to add gold spacers and big clasp but sge said the pearls are so pretty on their own that it would be better without anything but a simple clasp. Maybe like well aged tbone steak that only needs salt. Let the beef flavour shine if you know what I mean...
Anyway...here is a few shot of it.

Just lovely, asurazzy! Great colors - I think they need to be set off with a simple clasp as well.