I hope this is the correct place to post this.

One concern i've been having when considering how to sell pearl jewelry is that how can i come up with original designs. If i make and sell a piece, am i risking accidentally stealing someone else's design? Or do we all have the right to use any designs we can think of without worrying about this?

This TED talk has nothing to do with pearls but all to do with fashion and copyright. It may help shed some light. Click here.

Intellectual property is an enormously complex legal area (in which I have passed exams!) Basically there are two international conventions organising design rights and copyright in the world. Most of the world follows one, the USA and some other countries follow, and then there are countries which don't bother about any such issues.
That's the law. well known brands have breached patents before now and been caught out and made to pay millions. Words etc ..well, it's easy to compare a couple of texts to see if they are the same.But designs are tricky because they are so hard to define.
Many people don't care if they copy a design (that's why knock off designer stuff is a flourishing industry) but at the same time, if you have pride in your product you won't want to be copying. I know that there are copies of some of my things out there (a six strand white pearl top drilled necklace for a start) and I could kick Hisano for getting the gemstone inlaying thing out there literally a day before I was photographing my version - but at the same time someone somewhere may well be looking at Hisano's and thinking 'oi..that's my original idea)....
But I'm not going to list the earrings I made with inlaid gems because I am prideful of what I do and respectful of what Hisano does. So I have a pair which will be for me. And that's it.
So yes, you can knock off any designs, but then you will be known as a knock off merchant.
Author:Pearls A Practical Guide published by Crowood Jan 2021
www.pearlsapractical.guide

It's not common, but I have seen gems set into pearls for as long as I can remember.

GemGeek said:
It's not common, but I have seen gems set into pearls for as long as I can remember.
Click to expand...

Absolutely agree with you, Gemgeek; I have also, with diamonds and colored gemstones.

Wendy, I haven't seen your inlaid stones, but I certainly wouldn't consider them a knockoff, and I don't feel you should either.
Pattye

Pearls often don't need a lot of "designing" if they are beautiful and good quality. That's why knotted strands are always in vogue. One way of setting yourself apart is with unique style clasps or motifs that are designed for your company.
Pattye

I have also seen pearls inlaid with gemstones before Hisano's, Wendy. I also would not see it as a knock off.

One further point...a trade mark can certainly be unique to you or your business or company. It is usually the logo or distinctive style which goes on your paper, website, over the shopfront etc - think McDonald arches.
(But a trademark - Mikimoto clamshells - is NOT a hallmark which is a mark applied to precious metal after it has been assayed and found to be of a set standard of proof by a recognised independent assay office such as the London Assay Office)
Author:Pearls A Practical Guide published by Crowood Jan 2021
www.pearlsapractical.guide

Wendy, how about a photo of your earrings?

Yes, I would really enjoy seeing them as well. On a side note, I love all the photos of the pearls on this site...so wonderful to see!
http://www.oceanscovejewelry.com
Instagram: Ocean's Cove
C

I've lived through several long discussion of copyright infringement on both the clay and the jeweler's boards. It's always the same discussion and the last part that gets agreed on is that there is nothing you can do that hasn't been done before. People are coming up with the same ideas independently of yours and unless you already own lawyers and can prove damages, don't waste your time fighting this battle but rather put your energy into developing and making the next wonderful thing.

Okay, here is one of the pearls-inlaid-with-gem prototypes. The sticks are as thin as 1.2mm and 42mm long. They're brown/black with pink purple, green gold overtones satiny metallic. 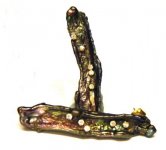 Wow! I love the colors. You know we need an ear-shot now...

Yes, ear shot please! Those are most intriguing!
Pattye

Those are so cool! I would also love to see how they look on the ear. So unique.
http://www.oceanscovejewelry.com
Instagram: Ocean's Cove
A

Yes, definitely need to see them on someone- those look REALLY neat! I don't know how you could possibly think they'd be too close in style to Hisano's design- these are definitely very different, and very unique! You could do an entire line of these- I envision bracelets, definitely a brooch or two, but the earrings would be wild!

Are they meant to be worn cuff style, which is what I'm seeing in the fashion mags now, or more like drops?

those are so cool! i'd so wear those. the whole inset diamonds thing, though, has been around. google Russell Trusso. or check these out: 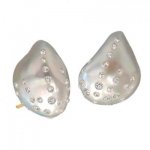 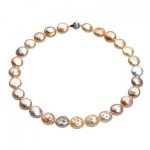 Love these earrings, Wendy! Organic and elegant at the same time. I would wear them in a heartbeat

Here you all are.my ear! 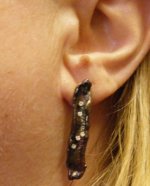