The pearl bug has bitten me hard! After buying a lovely, classic white akoya strand from PP (with help from the PG family), and then the "Periwinkle Perfection" strand and earrings set from the PP tahitian sale (ok, that was a vday gift), I'm now looking for a naturally blue strand. Madama strands are waaaay outside of budget, and it seems there wasn't much "blue" around in HK recently, so I was looking at PP's selection of silver blue baroque akoya strands. With thanks to Kacie at PP, I asked the team there to take pics of the most lustrous/bluest strand they could find in either 8.5-9mm or 9-9.5mm. The pictured strand was the bluest. What do you all think about it? I really appreciate your more expert eyes since I'm still fairly new to the pearl hunt. I also remember reading that smaller sizes tended to be bluer- should I ask them to find the two bluest smaller mm strands and perhaps make a double strand? I don't like smaller than 8mm on me but if doubled, smaller might be ok. 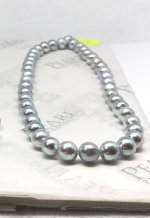 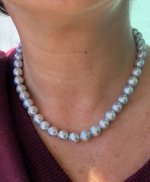 Really, I couldn't choose! I'd probably go with the largest one; fabulous colorful choices!
Pattye

I really wanted something quite blue and with the wonderful pink accent (not confident enough to know what the right word is ) but both times I tried, the strand was mostly silver. I think I just didn't spend enough...

My first blues were very pale, but have a great soap bubble effect. My later blues are deep blue with strong pink overtones. I really cannot pick a favorite.
S

Just wanted to update. I ordered a 9-9.5mm blue baroque akoya necklace, 16", from PP and it arrived today. It's lovely but I'm not sure it's quite as blue as it looked on pictures and as I'd hoped. Not sure about keeping it, though of course no complaints about their customer service- fantastic as usual! 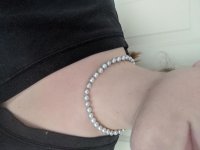 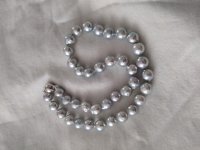 Is this photo right out of the box, or after a few hours? Pearls improve after a few hours in the light.
Great qualities for luster, matching, plump and pleasing, but see if you grow to love them over a couple of days. If not, more pearls will come down the pike, God willing and the crick don’t rise.

‘Blue’ is a relative quality in pearls, at least I don’t find it to be really straightforward in my very limited experience. For instance I’ve seen lavender freshwater pearls that I consider more blue than blue akoya.

****eta - nonono, I need to correct that last statement, except for the part that mentioned my very limited experience, which is 100% truth. There is nothing like a blue baroque akoya.

*The exemplar pearl in both photos below is a blue baroque akoya.*

I just took out the freshwater I considered blue, and they had too much pink to be considered blue. They were more violet. Even the individual pearls on the mixed color tissue-nucleated-only (about 5mm) babies were violet. 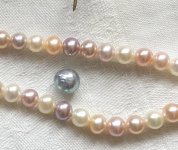 Also, what were sold to me in all innocence (a re-homing) as blue-ish tissue-only freshwater - I candled them, with a laser pointer, and a fair portion were beaded. No harm no foul. That’s the picture below, with the top strand, blue-ish, unknotted,
then (middle) the Tahitian, the Blue Baroque Akoya, the clasp
then (bottom) the lavender CFW AAA, from PP (a while ago)

Sage advice! They are right out of the box (how could I resist?) so I'll give them a bit. I think the tricky part too is that people see colors differently.

There are all sorts of different blues. If these don't float your boat, there will be others. Sometimes the smaller the pearl, the bluer they are.

That's what I found the two times I have bought blue akoya - not as blue as I had hoped, more silvery. There's probably a kind of light where they look more blue.

Sarah,
Oh, I do love this size Akoya! What I've noticed when pearls are so shiny and metallic, they really reflect the colors around them. How do they look with a pastel shirt? They are very complimentary with your coloring.
Pattye

I think they are very, very pretty, but definitely on the silvery side. It’s a great size on you.
That said, if you’re really after blue, I’d be inclined to try for a slightly smaller size or wait until the next lot of blues come in.

Sarah, I have only recently in the last year, purchased blue akoyas. One is a smaller mm choker, and the other is a larger mm princess length strand. I must agree with BW, the strands I have, as well as others I have seen, it appears the smaller the mm, the more blue in appearance and the more one sees the pink/rose overtones. My smaller choker, is definitely more colorful, than my larger, which appears more silver with slight blue overtones. My clothing I choose to wear with these necklaces, also will either enhance, or detract from the blue colors in each.

I think the strand looks lovely on you. Even if it is more a silverish blue, it looks beautiful with your skin tone.
K

The Blue Akoya are very tricky. The can easily appear more blue in photos than in RL . That said the top strand looks more blue. When you move them around the house do they ever look blue ? Sunshine is not kind to them . They certainly look more silver blue than Blue Silver.

It's not easy to get good BA. The last show I was at in HK Betty Sue King offered me 6 strands of Blue Akoya that she had in stock , at her cost, if she couldn't find any that were more blue. We scoured the Akoya section... I walked out with 4 to add to my stash and she bought a couple but couldn't find anything more blue that her present stock. When you consider the number of strands... that's not very many to take home. ( these were Baroque Blue , there were quite a few Madama and rounds - but the Baroque seem more blue )

Update: I didn't feel that the PP strand warmed up on me, so I returned it. It really seems that blue baroque akoya are not abundant right now, as others have said.

I went out on a limb and ordered a strand online. This one is a double strand, which I've also been looking for. Today was basically the same weather as when I tried on the first strand, and I put on the same top to try to give the strands a fair comparison. So far I like them.more than the first strand. 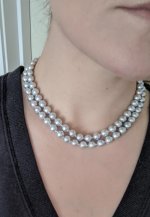 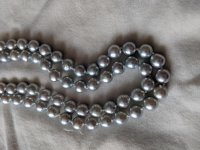 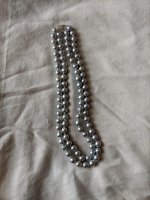 This is a comparison layout picture just to see them side by side. 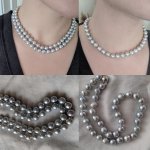 Beautiful! The side by side pictures really show the difference in color.

I love the double strand!!

You look lovely in the double strand, SydK, and it has lots of presence!! I'm glad I didn't have to choose!
Pattye