Pearls are not only a product of a living being -a mollusk- but their “mother mollusk” is also a host for dozens of other life-forms! When we think about other animals that we use in our lives (as a food source or as a luxury good, such as furs) we can rarely imagine these creatures being a part of something larger or co-existing with other animals from different species. We may picture a henhouse bursting with chickens, or a pen full of cows, but we find it hard to imagine these caged animals as being a “part of something greater”, but with pearl oysters it is quite the opposite and quite fascinating.

In Nature, pearl oysters are usually found attached to rocks or hard corals, thus they are surrounded by other life forms and their rock-like shells make them extremely attractive to many species of plants and animals that will call a pearl oyster “Home”. I once handled pearl oysters that were literally covered with Life: it had about five species of algae, six species of polychaetae and flat worms, eight species of crabs and crustaceans, four of “snails” (conchs, limpets, and chitons) and seven species of other mollusks (drill mussels, geoducks, mussels, scallops and other pearl oysters). And these were the ones I could see just by using my eyes.

In a sense, pearl oysters resemble a “small ecosystem” of their own, a self-contained biome where a tug of war ensues and leads to eventual stability. But why would this be important? We still have two more articles to explore this subject, but it is important to say that sometimes we focus on the “large” item on the picture and totally miss out on all the other important images. One of my teachers once told us: “we were at a gray whale symposium and the speaker mentioned the importance of saving gray whales, when another man asked his voice to be heard and explained that without gray whales, we would also lose a unique species of barnacle”.

We rarely see the whole picture. 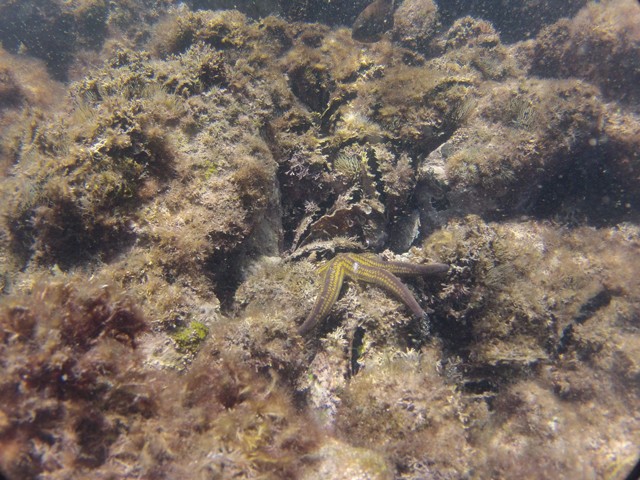 A small pearl bed in the Gulf of California, Mexico, displaying a complex ecological structure of corals, algae, invertebrates. The starfish is slowly approaching its prey...
Click to expand...